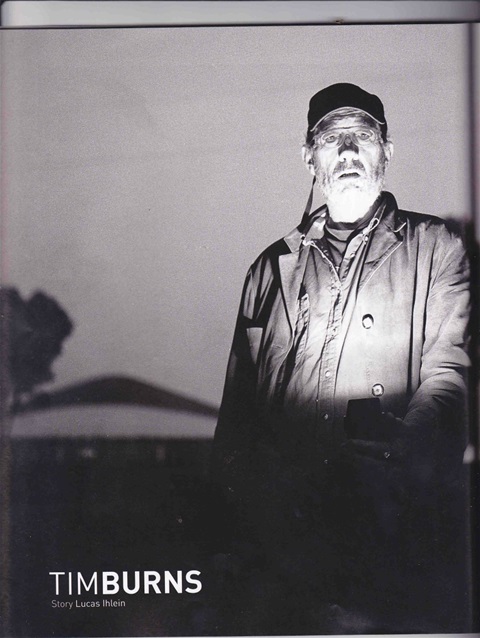 Tim Burns is a legendary figure in the history of Australian underground art. He rose to notoriety in the early 1970s with a series of (literally) explosive art actions, before decamping to New York, where he remained, on and off until the mid-1990s. He now resides on a large property near the town of York, in Western Australia. Rather than identifying as a painter, filmmaker, karaoke videographer, installation artist, theatre director or performer (although he has done all these and  more), Burns calls himself “a context artist”. What unites the hugely varied set of projects Burns has worked on over the last forty years is a constant desire to set up situations which critically reflect on our hypermediated, industrialised western society. His interventions are usually created live, in the public sphere, rather than being quietly crafted in the privacy of a studio setting. More often than not, they result in some sort of dramatic surprise or shift in the participants' attention.  Lucas Ihlein  February 2011 for Artists Profile, Sydney. Photo Redmond Bridgeman

His  performance installations in the 70's including 'A change of plan' [AGNSW], 'Minefield' [Mildura], ' For The Sake Of Art' [ Ewing Gallery], 'Not Ceasing to Loiter' [ Adelaide Magistrates court] and the book 'A Pedestrian Series of Postcards [NYC]became historically seminal works in Australian art.

He was a pioneer in the super-8 New Wave in New York, producing 2 features, Why Cars, Carnage (l977) and Political Transmission (l978). CARnage received the NY State council film award 1978 and was selected for the International Situationist Show to tour the Beaubourg Museum in Paris and the ICA in London and Boston curated by Peter Wollen.

His major film credits include Lukes Party (co-producer/director, 1991) a 16 min film which won the Cinema du Reel Paris, the San Francisco Film Festival, Golden Gate Jury Award for Short Fiction, The Frames short fiction “Innovation” Award, Adelaide and the Irwin Rado Award for Best Australian Short Film Melbourne Film Festival. Luke’s Party is currently being included in the Australian Centre for Moving Image's Screen Lounge in Federation Square Melbourne.  His 16 mm feature film Against the Grain (l980), co-produced with the Australian Film Commission and the Sydney Biennale, was an important film in Australian experimental narrative and was shown in major International Film Festivals in Edinburgh, Berlin, Montreal, Viaodalid, Paris, Tokyo, Perth, Melbourne and Sydney as well as releases in Australia the US, UK and has been translated into Spanish and Japanese and his work has been aired on PBS, Time Warner in the USA, ZDF in Germany, and Channel Four in Great Britain.

His production company Third Degree Burns Unit recent performance works in Western Australia include Autogeddon - The Ride for Artrage '99, White Cells for The Perth International Fringe Festival 2000 Tunnelvision for Artrage 2000 and THIS IS I.T.? a CTV, Access 31 and Perth Festival co- production. These productions combined elements of theme parks ,theatre, film and television to attack aspects of transport, prisons ,surveillance and community TV

His television credits include producer/director for The Operators, a 13 part interactive sitcom for cable TV through Time /Warner in New York, producer/director for Playboy TV enterprises in New York, artOfficial, National award winner of info/doco series for Community TV in Australia in 1999 and This is I.T. a live interactive show for the fringe of the Festival of Perth 2001. He has also produced, directed, shot, edited or worked on a number of Music Videos in New York for Australian bands such as Crowded House, Midnight Oil, and Nick Cave. He also wrote, produced and directed 50 music videos for Japanese video juke box and karaoke company Diechi- Koto

Recently he has been living and teaching film, art and interactive broadcast television in Perth, Western Australia at Edith Cowan University and Curtin University and is currently doing a PhD in Future Filmic discourses, Surveillance and Interactivity at Murdoch University where he has taught Documentary and film production. He has an MFA from the University of Western Australia on determinism in the Pintubi community in the Western desert on which he wrote a feature film script 'The Stolen Film' with support from Screenwest, the WA state film commission.

His current work centres around the Aboriginal history of the York area where he has acquired a granite quarry annexed from the Balladong sacred site for men’s business and with the support from the local Aboriginal elders, and is constructing a series of works under the title of ‘Property Is Theft’, the first work of which is a multi/screen hybrid work titled ‘Sight Unseen’ that looks at a number of court cases involving Aboriginal defendants over the last 175 years since white occupation. This work is in production at the moment with the assistance of PICA’s  development grants.  In June 2007 he had a retrospective at Uplands gallery in Melbourne that consisted of an installation of  300 A3 documents and photos and screenings of 10 films and  video. In 2006 he presented in collaboration with the York Theatre group the first stage of ‘Sight Unseen’ for the York 175 years since white settlement celebrations. The retrospective show plus a series of prints and recreations were shown at Urban Dingo as part of Fotofreo in April 2008. His work ‘Roadkill’ was shown in the 2009 'Sculpture by the Sea' shows in Cottesloe and Bondi. In 2010 he participated in 'Mildura Palimpsest' and 'Against the Grain A Survey' of his work and performances at the Australian Experimental Art Foundation in October 2010. This show is about to tour regional galleries in West Australia through 2013-15 with Art on the Move. In 2013 he showed at Laure Genilard gallery, and ‘The Big Deal’ London and the New Museum in New York and at ABC No Rio in New York in 2014, Madurah Art Centre SPAM  2015, Sculpture@bathers Beach 2015, Artist Village  Taipei, DIAtribe_interacTiV 2015 in progress, Artspace book fair Sydney sept 15, Anthology Film  Archives  film retrospective New York feb 16,

He was awarded an ArtsWA Fellowship in 1999 and an Australia Council Artists Fellowship in 1996.He has also been awarded a Wahol/Rauschenburg foundation grant in 76, the American Institute of Graphic Arts Book Award, 1977 for 'A Pedestrian Series of Postcards',The New York State Creative Arts Award 1978 for 'CARnage!' and the National Endowment for the Arts (US) for performance in 1984 [ 'FBI/SPY' ]

His work has been exhibited in numerous major shows and art institutions, worldwide, including The Beaubourg Paris, ICA London, ICA Boston, MOMA New York, The Hirschorn Museum Washington, the Baltimore Museum,  The National Gallery of Victoria, Art Gallery of NSW and South Australia, The National Gallery of Australia, the Sydney Biennale and numerous regional galleries in Australia. He is represented in public and private collections internationally.